delta patrol…pic of the day 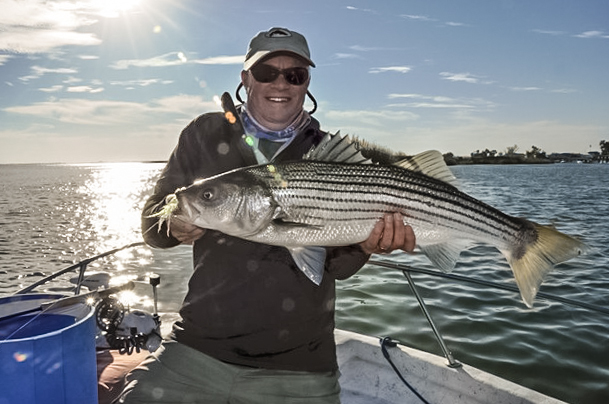 Bob Popovics releases a schoolie bass on the shores of Marthas Vineyard. photo by Al Q

Congratulations to our friend, Mitch Orquiola who landed his first striped bass off the surf on a lucky craft lure. Photo by Mitch Orquiola

ok, so I am laying in bed, right. and at 7:12am I get a text, “25 lb. striper” from my fly fishing buddy, Jim Solomon. So i immediately give him a call, hoping this isn’t a prank. Jim answers and says, “i did it I got a 25lb striper, wait to you see the picture”  I got the whole play by play and seriously couldn’t be happier for my buddy, who deserves this fish because he puts in the time and effort every week.  This is a lesson to all surf fly fisherman, never under estimate the ability to see structure, even if it isn’t very pronounced.  the fishing was slow this morning as Jim and Bob Middo worked the beach.  Jim spotted one small but defined little cut as he was fishing his way down the beach. He pointed it out to his fishing partner Bob and then fired a long cast into it, on the second strip, his fly stopped and was inhaled by this beautiful striper, which immediately took off towards Catalina. After and epic 15 minute battle which included dealing with a shore break, running down the beach and a dealing with a plastic bag temporarily stuck on his line, surfed this trophy to shore. the fish was photographed and released unharmed. it doesn’t get better than this folks, especially when we shouldn’t be hooking and catching stripers on flies in our home waters…i will be posting Jim’s fly, “The Solly Clouser”, stay tuned… Click here for a pdf on how to tie the Solly Clouser!

Last week I was fortunate enough to spend a few days in Montauk Point, Long Island with my longtime fishing buddy, John Whitaker. This is the magical time of the year when the great fall migration of bait and predators intercept each other and  begin their journey along the Atlantic coast towards the Hudson and Chesapeake river systems. It is really neat if you time it right and we luckily did. Living in California, my inner saltwater time clock usually starts to twitch around September only because I have experienced many of these blitzes fishing as a young teenager off the beaches around Breezy Point and Coney Island and I know they are beginning. John had never witnessed this spectacle before and he walked into it with eyes wide open. We had fantastic fishing with numerous slams, (striper, false albacore and bluefish on the fly in the same day) on the boat. The most memorable moment for me, being such an avid surf fisherman, was seeing my buddy John hook up in Turtle Cove under the famous lighthouse on our last day. This was to be John’s first striped bass off the beach on fly and he did a great job amongst the picket fence of montauk spin fisherman. Timing his cast perfectly he threw into the passing blitz. His small rain bait fly was immediately pounded by a nice ten pound bass. It was awesome and will remain a great memory for me! High fives were in order. I personally would take one bass off the beach to ten off a boat any day. It doesn’t get better than that.