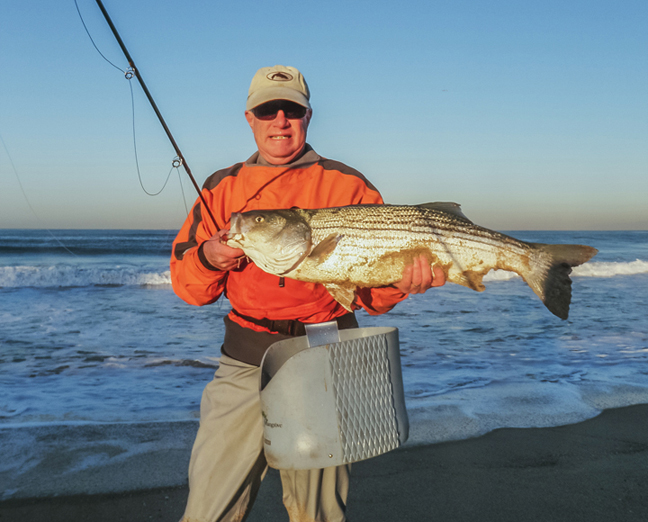 ok, so I am laying in bed, right. and at 7:12am I get a text, “25 lb. striper” from my fly fishing buddy, Jim Solomon. So i immediately give him a call, hoping this isn’t a prank. Jim answers and says, “i did it I got a 25lb striper, wait to you see the picture”  I got the whole play by play and seriously couldn’t be happier for my buddy, who deserves this fish because he puts in the time and effort every week.  This is a lesson to all surf fly fisherman, never under estimate the ability to see structure, even if it isn’t very pronounced.  the fishing was slow this morning as Jim and Bob Middo worked the beach.  Jim spotted one small but defined little cut as he was fishing his way down the beach. He pointed it out to his fishing partner Bob and then fired a long cast into it, on the second strip, his fly stopped and was inhaled by this beautiful striper, which immediately took off towards Catalina. After and epic 15 minute battle which included dealing with a shore break, running down the beach and a dealing with a plastic bag temporarily stuck on his line, surfed this trophy to shore. the fish was photographed and released unharmed. it doesn’t get better than this folks, especially when we shouldn’t be hooking and catching stripers on flies in our home waters…i will be posting Jim’s fly, “The Solly Clouser”, stay tuned… Click here for a pdf on how to tie the Solly Clouser!