I had a great birthday yesterday spent buddy boating with a great group of fly boys offshore. I was out with Roy Fukushima, Ken Oda, Steve Hanano, Jon Nakano  and Greg Madrigal. We launched out of Dana Point, picked up a big scoop of anchovies and headed south east towards the 302. We jumped patties as soon as the sun broke through the horizon and there was enough light to see them. Roy and Ken had great eyes and spotted many patties far off on the horizon. The first stop yielded a firecracker yellowtail and small ahi for my buddy Roy, the ahi his first on the fly. We all got firecrackers on numerous paddies, small yellowtail were abundant. We were looking for dorado and tuna. The fun is this was pure opportunity fishing, each paddy discovered is different, some held fish and some were completely void of life. Having a second boat working on the horizon made scanning the ocean a lot easier. Six pairs of eyes are always better than three. Once one of us found something we investigated it and if there were fish there we radioed the other boat to join the party. Good old fashioned fly fishing fun. On the way back Steve called in as said they found a small patty that may have some tuna on it so we headed their way. When we pulled up both Jon and Steve were bent. We threw a few baits and the ocean exploded like someone drop canon balls around our boat. I immediately hooked up but dropped my fish, user error on my part, but Ken hooked a nice one on his 8 weight and all I hear is, “oh Shit”. Ken to his credit landed this fish like a seasoned pro, his old commercial fishing days kicked in and he had that tuna on the deck in ten minutes. It was his first ahi on fly and on an eight weight to boot, just awesome. Seeing a few flying fish and skating across the flat blue ocean with a great group of guys was a blast. The water temps were near 78, which is why we had so many patties to work off of. The patties were pushing up the temp break from Mexico where most of the pelagics are coming from…

leaving the harbor and looking to the east was a glorious sunrise. Photo by Al Quattrocchi 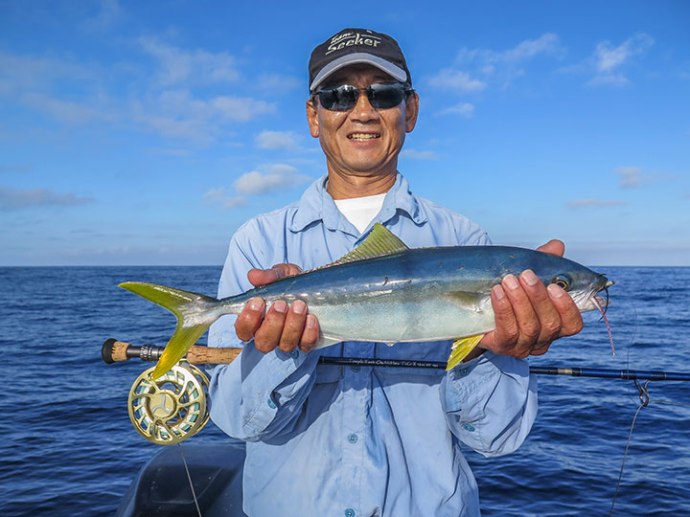 Roy with a nice firecracker yellowtail. Photo by Al Quattrocchi

Roy with his first Ahi on fly. Photo by Al Quattrocchi

Ken and Q double up. Photo by Roy Fukushima

Ken get bit on his 8 weight.Photo by Roy Fukushima

Ken gets his first Ahi on fly. Landed on an eight weight, quite a battle. Photo by Al Quattrocchi 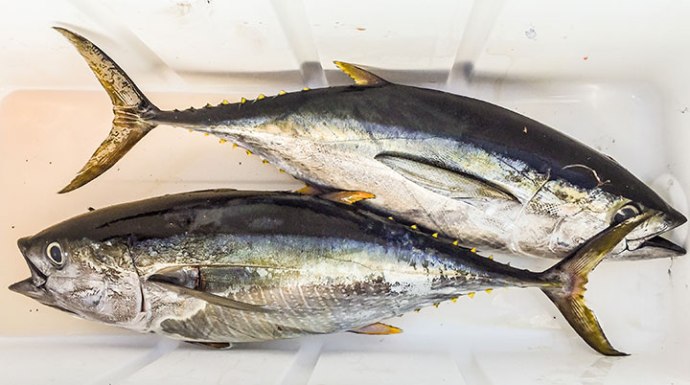 Some of Jon’s beautiful tuna. Photo by Al Quattrocchi