I asked my daughter, Quinn if she was willing to get up early with me this past Saturday to try an catch a Corbina. She remembered our first outing two years ago when she was 8 and she landed two fish that morning with her dad, so she was all in.  I rigged up the spinning rod, using a carolina rig with a light 1/2 oz. barrel sinker and a size 4, red mosquito hook. She asked me if we were going to use crab sandwiches and I replied yep. The crabs were still a little small so I like to pin two crabs, back to back, or sometimes even three crabs on one hook. They can’t resist the crab sandwich. The one thing we had going for us was I knew where these fish lived. We saw a few sliding so we casted her crab sandwich just behind a small wave heading for the real submerged crab bed. The light sinker allowed the sandwich to roll over the crab bed, sort of like rolling a beer bottle into a jail cell. It was less than ten minutes when Quinny’s rod went bendo and she replied, “Dad I got one!”. We rehearsed the fish fighting technique in the car so she was on it, pumping the rod up, reeling down and putting the wood to the fish.  When she got the first fish close to the beach I coached her on how to surf her fish to shore and let him run if he got freaked out by the shallow water. She slide a 21 inch fish on the beach.  She later landed another around 19 inches. So in doing the math, she’s been out with me twice now and landed a total of four Corbina in just few hours and Pop’s got zip. LOL I think I am gonna stick to guiding her, we make a good team! LOL 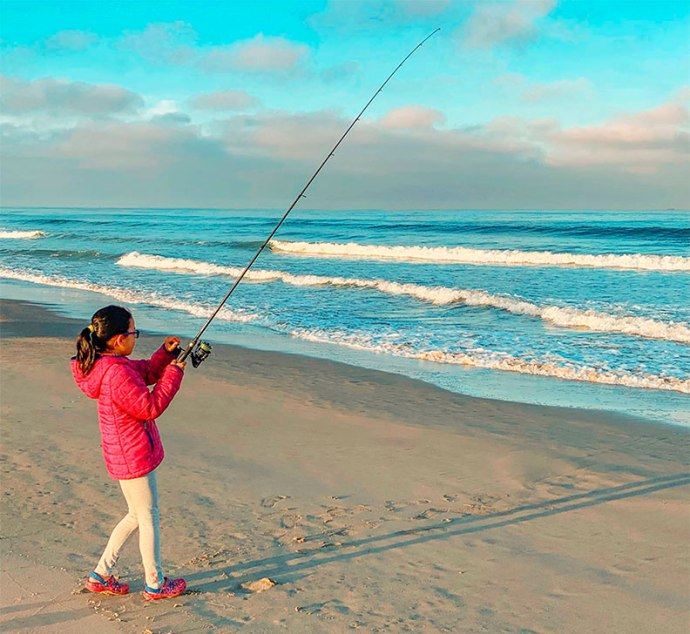 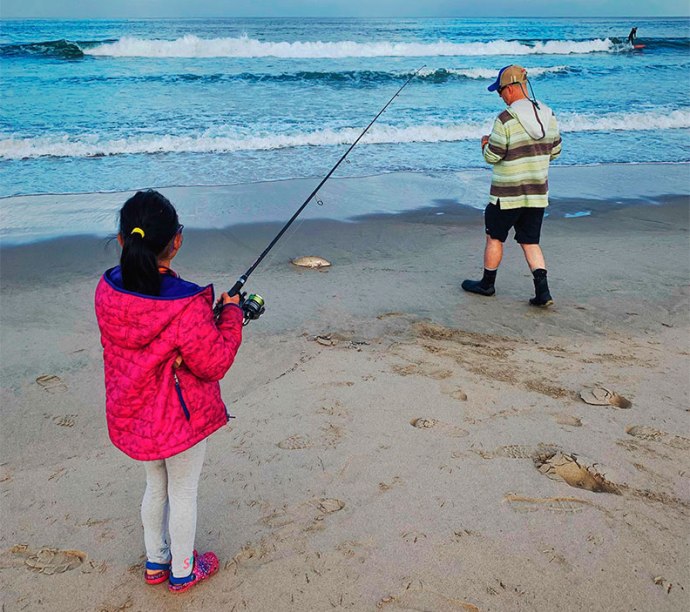 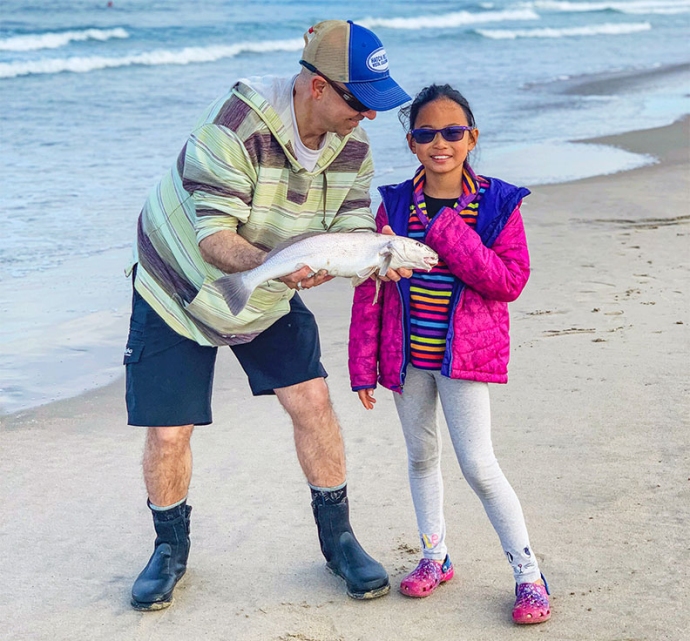 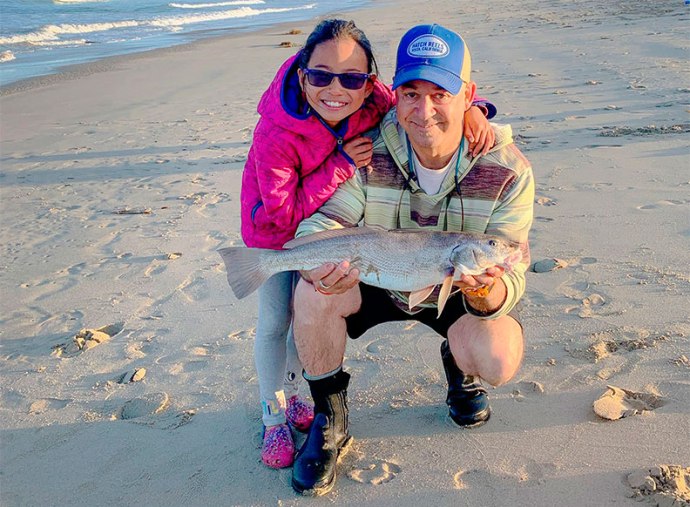 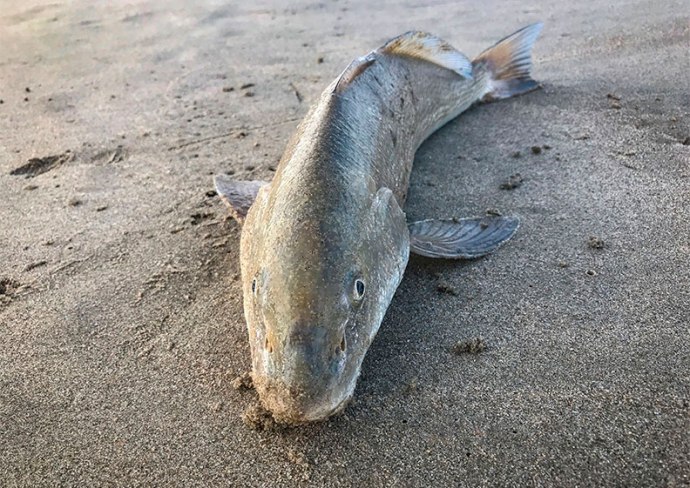 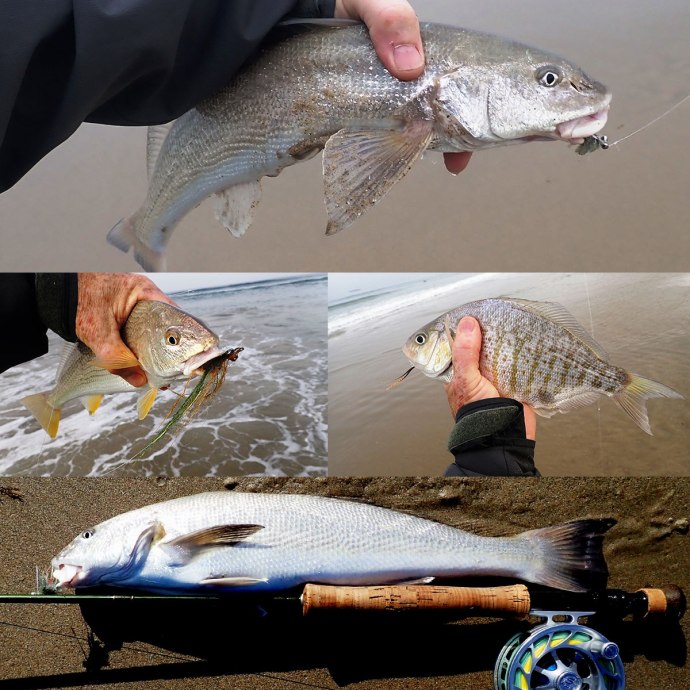 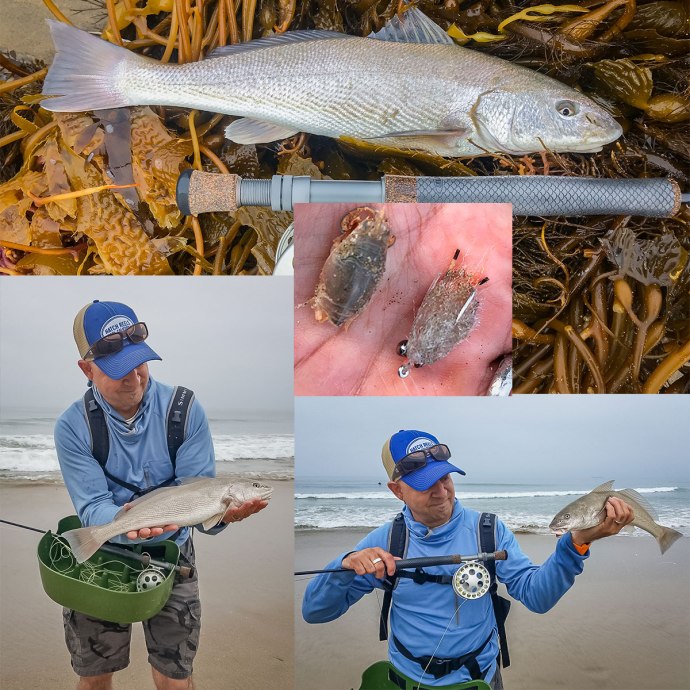 Al Q with three beans all landed on the holy moley crab fly.

I always say, When those purple jackarandas start to bloom, the corbina are staging to feed in shallow water.

Me and the boys hit the beach early Sunday morning after hearing about a good yellowfin croaker bite. We were all spread out down the beach of sight, connected only by cell phones. When I got down to the beach in the early morning light I stopped to observe the pattern of the waves and look for structure. To my surprise the Corbina were feeding in the shallow water right at our feet in multiples, sliding and tailing. It was weird because the water temps on my app were showing cooler water, they shouldn’t have been doing this but the water was warm. I told my buddy, dude, change flies, put on a sand crab fly, stay way back and cast, the beans are working. It felt like the middle of the summer, only there was no one fishing, the beach was empty, it was cold with the early June gloom, and no sun. But nobody told the fish. It was a very cool and welcome early season start to the Corbina patrol…The water temps today showed 67 degrees, which totally makes sense! I personally like 68 but what do I know? It’s officially summer bean time, its on!

pic of the week… 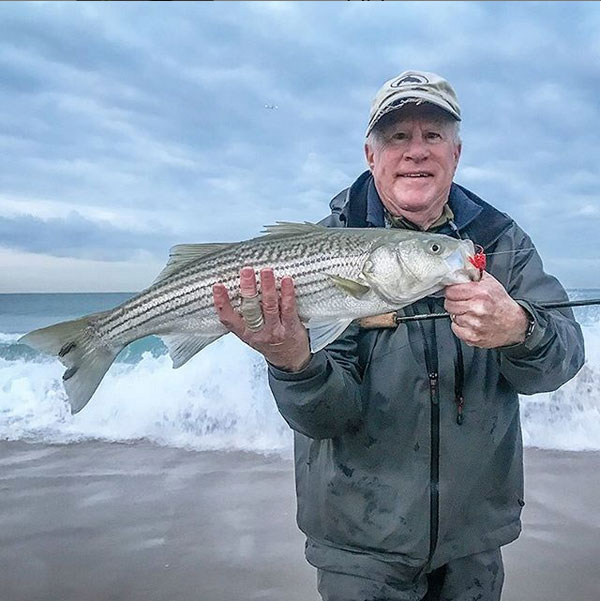 Ending the year with a true SoCal trophy from the beach, Jim Solomon (theflyzone.com) getting it done in our local waters on the morning of December 31st, 2018. It was awesome to watch Jimmy land that beautiful fish. We were actually targeting them, they cruise our local beaches this time of the year when the water gets cold and the perch show up… as Steve Perry once said, “Don’t Stop Believing, Hold on to that Feeling!” 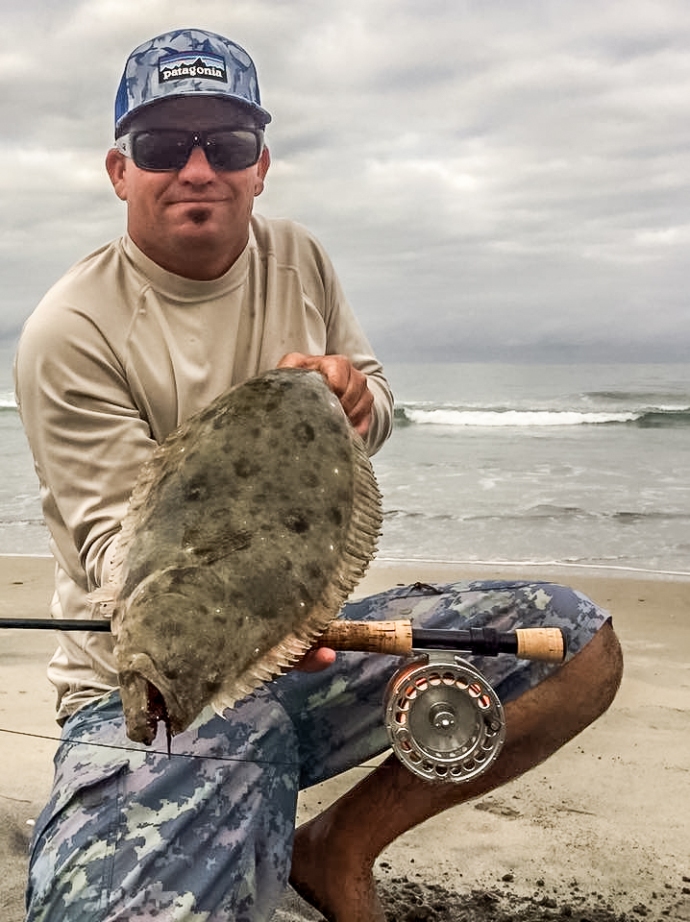 Fly fishing the surf this morning out of Oceanside, our good friend Dustin Sergent nailed his PB halibut from the surf on one of my surf fly patterns, the Qs Beach Bug. Way to go Dustin!. “The halibut hit on the third cast into a lateral trough. Slammed it!” 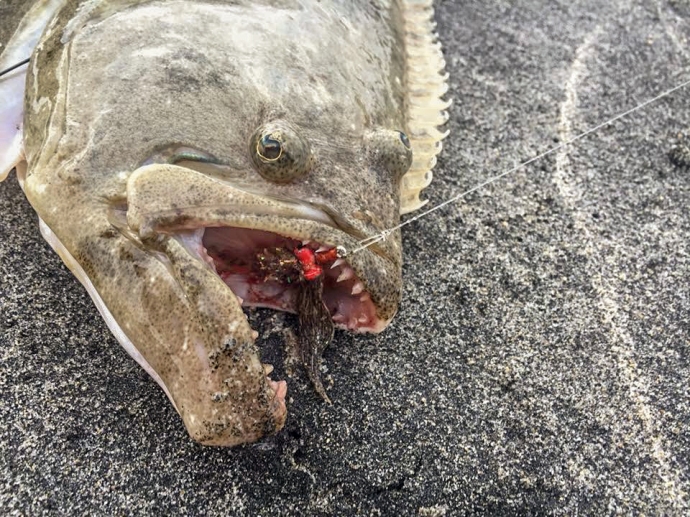 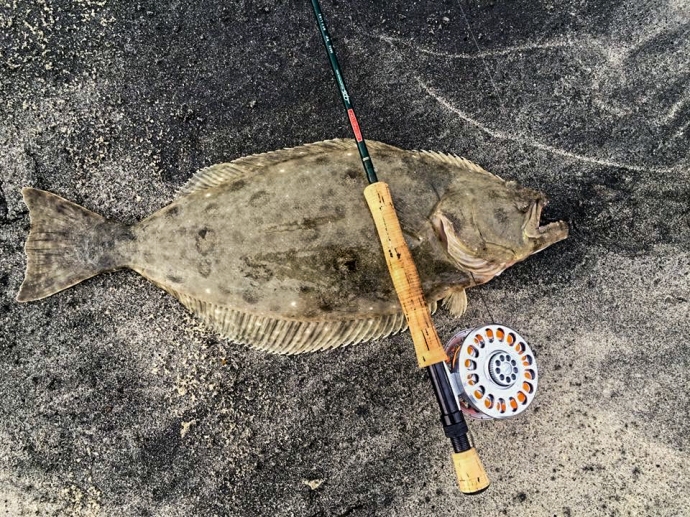