Tod goes three for five after a long beanies streak on the sand. He was on fire! photo by Al Q

a new EP sand crab I have be working on, Ill be tying some of these this weekend at the Fly Stop in San Diego this Saturday from noon to three pm. 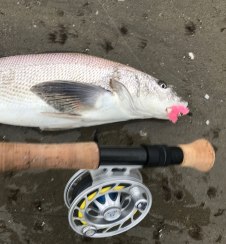 I field tested a new SLV Okuma fly rod the past week that a buddy got me ands far landed seven species on it. Check out the Fly Zone with me and Jim Solomon to learn more about sight casting for corbina.

Brad, a newbie to the corbina patrol and flyfishing for corbina, landing his third bean in two days on the surfin merkin.

Jim Solomon, Fly Zone master with one of two beans landed on Father’s Day. All on the pink surfin merkin. WTG Jimmy. photo by Al Q

Tod working his third bean of the morning on a pink modified, surfin merkin 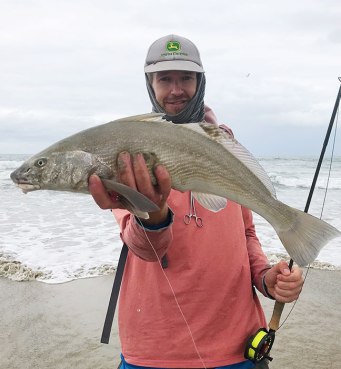 Yes dreams do come true. Brad with a beauty that took him into his backing. Photo by Al Q 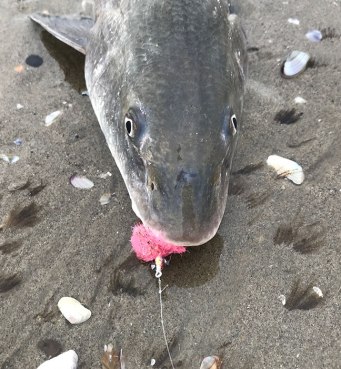 she ate the bubblegum before breakfast. a big mistake. photo by Al Q

I love those days when the wind is down, the swell is dead flat and the sun lights up the water like your in the Bahamas fishing for bonefish in a swimming pool. You can spot Corbina all lit up, a half a mile a way. NOT!!!!

Sunday’s early morning session was crazy with rain, wind, no sun, choppy surf.  Even though conditions were not favorable, our Corbina posse landed seven fish, which is an above the average Corbina count, given this fish’s ability to drive you crazy and have lock jaw often… we had a small swell but the wind tended to foam up the beach making sight fishing pretty difficult, so what do ya do? You can go home and curl up in bed or you can tough up and spend more time searching and less time standing around waiting for something to happen. The moral of the story? Study the beach, walk! Once we located fish in one particular area the boys put a hurt on them. Tod who went through a long fishes streak, hooked five and landed three. It can be done, I have seen this scenario played out before. This game is about perseverance, don’t get frustrated. the more time you put in on the beach the more the rhythms of the beach become apparent. Watching these fish work the surf line is for me just as cool as catching them. Be one with the bean! The anglers that catch them  consistently are usually in areas where the corbina are most of the time. Finding those areas is what separates the average weekend warrior with the seasoned veterans. Even on beaches with no structure the fish spread out but there will be a small seam or slight depression or sand crab bed that will concentrate more fish in a particular area. This is what we look for, it is prime real estate in bean town baby.  Tight lines 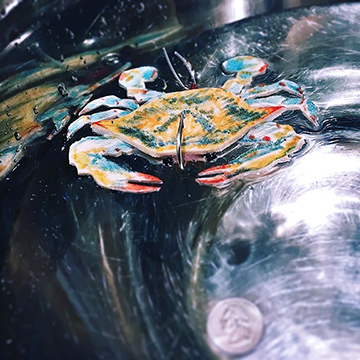 Ok, this is a little crazy, but our guide in Louisiana just requested a floating crab the size of my hand. So I made a soft shell blue crab ready to fry and throw into a PoBoy. This is the prototype, the first one, and I am not quite there, but it floats really well, its a little heavy and casts about as aerodynamic as a tennis racquet. I tried casting it with an 11 weight and floating line and can throw it around forty feet without blowing out my arm, the emphasis on toss, not cast. LOL. I used clear silicone to hold this sucker together and I hand cut the legs and claws out of thin craft foam. I used markers to color the crab. Its pretty easy to make once you got all the pieces. I will give you guys a report on the performance of this floater once I get back from my trip next month, I really hope something eats it just for the hell of it.   -Al Q

the road to paradise! 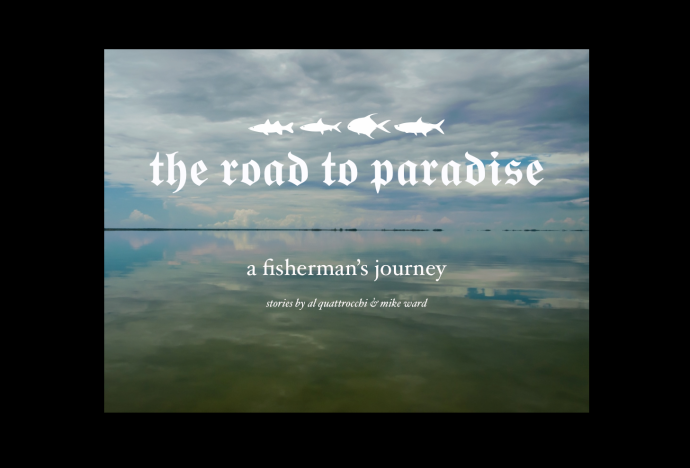 Please join Mike Ward and myself for a fun and casual slide presentation on the southern yucatan at the SouthBay Fly Fishing club in Westchester (near LAX)  this Wednesday, September 12th at 7:30 pm.
I will be tying a few flies and Wardo will be telling a few lies, it should be a fun evening…

Fly fisherman, biologist, diver, lifeguard and artist extraordinaire, Tim Gunther puts his touch on some of California’s best known species. I have been an admirer of Tim’s work for many years.

” I have been drawn to the outdoors for as long as I can remember. The complex beauty of the natural world continues to amaze and inspire me.”  –Tim Gunther