Last week’s minus, early morning low tides produced a few nice fish for the boys…the water temps are still a little cool in my opinion, varying around 63 to 65. The next early July new moon tide cycle, is the best Corbina opportunity you will have if you want to land one on a fly especially if the water temps hit the magic 67 plus…it should be wide open with fish crawling all over the place… hope to see some new faces on the beach…tight lines and message me on this board if you have any questions… 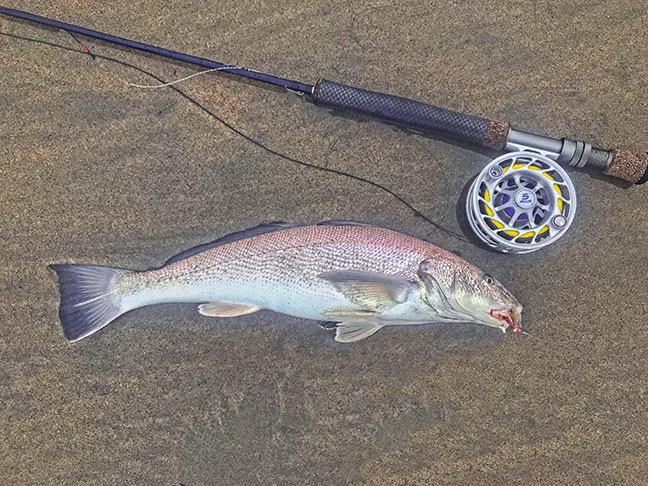 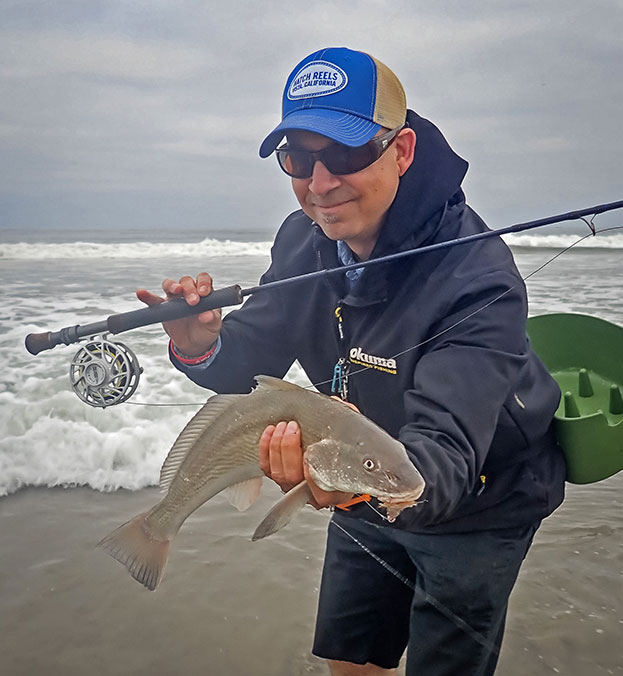 Another one eats the grey/orange Holy Moley fly. Photo by Jim Solomon 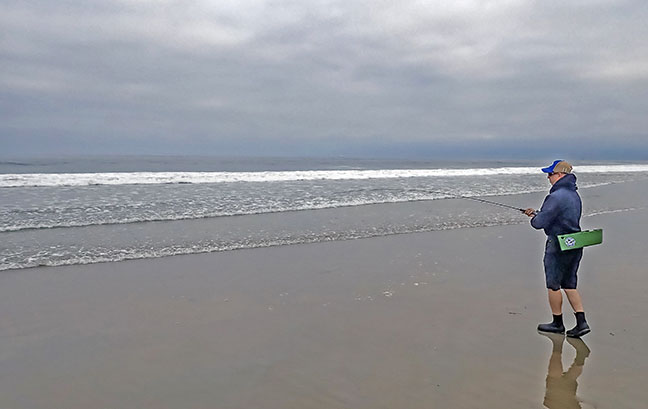 Nick gets picked up on a light pink, surfin merkin..Photo by Al Quattrocchi

Solly walking his Corbina onto the sand. Photo by Al Quattrocchi

save the dates! first one is coming up 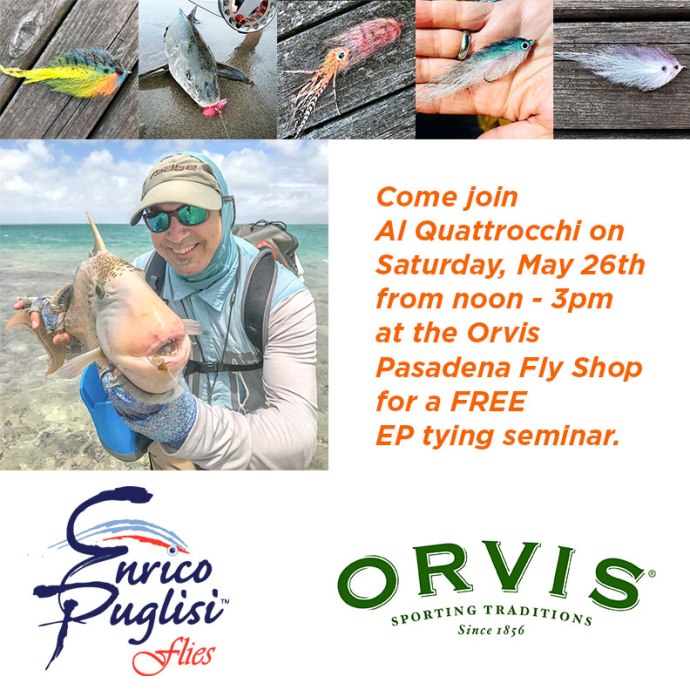 I will be doing a series of Fly Shop fly tying dates this year on behalf of my good friend Enrico Puglisi and his wonderful fly tying materials, which I will use to demo five basic baits we use in Southern California. I will be doing a altered version of the surfin merkin (sand crab), a squid, anchovy or sardine, bluegill and shad. Hope you can come by and heckle me, lol. This is the first of four dates. The dates are below:

pic of the day!

Fishing some new real estate paid off. A beautiful clean bean, sight casted and landed by our buddy Larry Acord on one of his special corbina flies. Photo by Denny Kaneoka 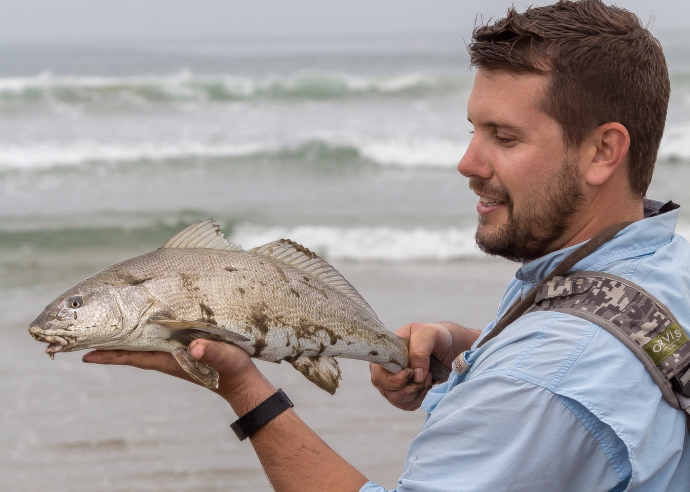 Al Q and Louie the Fish chatting it up last Tuesday morning in Santa Monica. Photo by Al Q

A pretty sunset corbina landed this past weekend on the fly, down in Pacific Beach, San Diego by local angler, Dr. John Whitaker

A sight fishing intro to corbina presentation by Al Q and Jon Nakano this Sunday morning at 9:30 am at The Fisherman’s Spot in Van Nuys.

I asked my long time fly fishing buddy, Jon Nakano to join me on Sunday morning at The Fisherman’s Spot, in Van Nuys to give his insights on our favorite summer sight fishing, surf species, the Corbina.  I have had the good fortune to fish alongside Jon for many seasons, he’s like the corbina whisperer. LOL The presentation is only 45 minutes so we will try to jam in as much local knowledge as we can, we hope to see some new faces out there on Sunday morning…there will be a short ten minute video at the end. cheers – Al Q

ok, last year I had to pleasure of meeting Glenn Ueda and posting many of his corbina adventures with you. I met Glenn fishing one morning on one of my local beaches, we became Corbina pals and I got him to come visit some of my home water. Glenn was on a tear last season, and ended up having the dream corbina season landing 25 sight caught fish off the beach in one season, pretty cool stuff.

So it’s the end of March and as many of you know, California is experiencing another El Nino year. Our water temps have been in the low and mid sixties throughout the winter. Yellowtail are literally beaching themselves, grin!  We don’t have much bait in our surf other than grunion, the sand crab beds haven’t begun to take shape yet. We have sighted some fish recently in the Southbay, but they didn’t seem to be aggressively feeding. Well, Glenn got out last week on his bike and scouted the lay of the land, somewhere in Orange County and found some fish walking the shoreline and and got them to eat the fly. I hope we get some of those feeders up our way soon. He landed three beans on two separate days. We will be following his fish counts closely this year, with this great start Glenn could break his previous mark. I hope he does, he really works hard at it…no free lunches…good luck buddy  LOL

“Wanted to update your blog readers on the first 3 corbina of the season! They were caught in a two day timespan, and is typical, the structure was eliminated under a crushing swell. Being March, not many fish sighted yet, and though water temps are hovering in the 65 degree range, sand crab beds are still absent. Perhaps, the memory of what should be there has them feeding in tight to the beach and thus tempted by the small #8 grey merkins I’ve been tossing. Regardless, I am encouraged by what I am seeing and remain hopeful that this will be another special year for a species that I have to come to admire, respect, and pursue endlessly.” 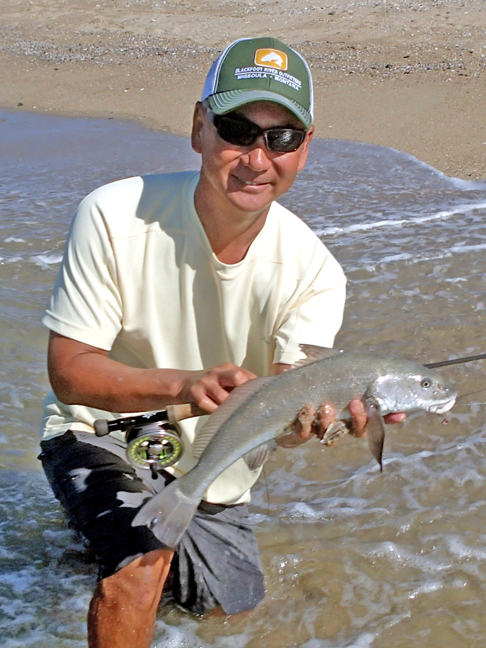 I just love it when a plan comes together, especially when it involves a friend that up in till this past Sunday hadn’t fair-hooked a sight cast corbina on fly. Jacob got in touch with me a few weeks ago about the possibility of fishing together and catching a corbina. He recently transplanted his family back to Torrance where he originally grew up from Utah. Jacob is not stranger to fly fishing, he used to guide up in Jackson Hole, drifting his clients to trophy trout. He is a stick! Last week we walked the beach for a few hours during poor conditions in the hopes of seeing a few fish but really didn’t have any good shots. Short wave intervals, cold water and some salad made it difficult, so it was an early breakfast. This past weekend we were graced with sunshine during the noon low tide which gave us the window we were looking for. Any time there is over head sun during a low tide cycle, in June when the temps are near 70, is a good thing when targeting beans. We changed locations from the previous week based on a good report I received from the corbina patrol. I got to the beach and immediately began seeing fish lit up with the afternoon sun. Jacob had arrived earlier and was further north of me so I called him on my cell so we could meet up and fish together. The weekend beaches in LA tend to be crowded which made this a pure combat urban fishing zone. You pick your slot to cast, sometimes waiting for onlookers, surfers, dogs or kids to walk by so they do not get in the way of a backcast. Very exciting and this adds to the difficult factor. The conditions were near perfect with a blue colored, well defined trough running parallel to the beach and long uninterrupted sections of clear foot deep sand bottom tickling the shoreline. We only get a handful of these days each year and Jacob stepped right into it. We were seeing twos, singles and occasionally a group of three or four fish. Jacob rod goes bendo and puts his first ever bean on the sand. We fist pump, take a few pics and release the fish unharmed. I told Jacob that I really wished I could be with him for his first fish that was now history. Then he proceeded to nail another larger fish which he expertly played to dry sand.  He had two under his belt but wasn’t done. We decided to split up. As he walked back north to where he parked, he noticed a group of ten fish. I just so happened to call him as I was in my car and he said, “dude i have ten fish in front of me and they won’t eat the fly” I responded, “keep casting, there has to be one dumb one in there, stay on them.” Ten minutes later, Jacob calls, me and says, “I got him”. Ok, so Jacob gets a trifecta, three beans in the middle of the day on a crowded beach on perhaps his really first day of sight fishing for corbina. That is sick! I would classify that as an epic day on the beach! Way to go pal!  PS: I hooked one fish and it popped off but this day wasn’t about me, it was about Jacob and how he will never be the same!