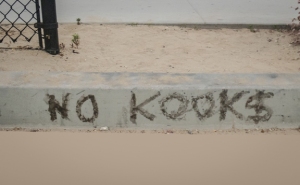 this summed it up for me! photo by Al Q

is the voodoo off? stay tuned…photo by Jim Solomon

well we decided to move around a little since the reports have been from all over the south bay. the corbina are literally on everywhere. we went to location x this morning, a place we haven’t fished in a long time. when we arrived in grey light, the beans had their backs completely out of the water and were bombing the beach like a WWII raid in Normandy. it was not hard to spot them, the early low tide had them sliding up and down, in groups of threes and tens. all big fish with stout shoulders. my buddy jim was first to hook up and landed a nice one to my right. He ended the day with two. my other friend rick got one. I had the corbina voodoo this morning. I could not close the deal. I hooked  7 fish and had six stick, on the reel, but they all unbuttoned. it was comical! the cool part was that I was seeing and hooking fish, watching their rhythms, sliding and later cruising inside waves, the bad part was they were all unbuttoning. Finally the last one stuck and we slide her up on the beach. as I was fighting this fish I mutter something like, come to poppa! at that point it didn’t really matter if she unbuttoned, I was fishing with my buds, with fish all around us, on a secluded beach, sight casting! too cool for words… 🙂